>>But Can They Find The Right Campaign Messages<<
By Nyalubinge Ngwende
Elections are won far away before the polling day. It is the campaign messages that build all the way to the polling day that give the opposition the favour of opinion polls.
But it is not every message that wins an election; people must interpret those messages into their social lives and see the reality.
Therefore opposition leaders in Zambia must not be cheated, reliance on the negative views in The Post Newspaper will not help them win the 2016 elections against the ruling Patriotic Front.
The first reason is that the PF message of pro-poor policies is still well-grounded among the call boys, necessity entrepreneurs and others who could be categorized as the street-wise life earners.
Taxi drivers in Lusaka own their own cars because Sata and his vice President Guy Scott bought them the cars on loan which they have paid back. The salary hikes, enforced through the minimum wage, for shopkeepers and unskilled public workers across the labour market is still a delight.
Despite the minimum wage statutory instrument annoying employers, causing the cost of goods to go up and has not necessarily resolved the high poverty levels in the country, the votes against PF is about two annoyed bosses against dozens delighted workers. 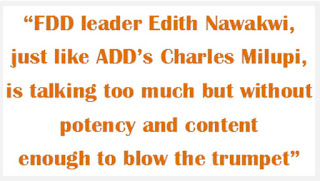 Lusaka residents, like most Zambians do, drink and they do it heavy. And after drinking they still have duties to hustle and find more money for more drink. It does not matter if they steal from government or blow up their hard earned incomes to keep up appearances in beer places. They value life by mingling in bars.
Therefore drinking is a popular culture than religion in Zambia hence, the beer tag on Edgar is not an issue. No wonder they are now calling the bigger Castle Lager bottle as chi-Edgar or chi-Chagwa, in reverence of the President we are told has had moments enjoying his drink.
No one will benefit from The Post’s use of opposition voices to conflict with the current PF government on shallow issues like beer or the health of the President.
FDD leader Edith Nawakwi, just like ADD’s Charles Milupi, is talking too much but without potency and content enough to blow the trumpet.
And lastly, apart from the fall at Heroes Stadium, if Lungu remains strong throughout, his health questions may not be an election issue. Zambians sympathise with the weak and are less tolerant to those who mock others over illness.
PF 2016 Defeat Is in Sight, but what will bring that defeat is the homework for opposition leaders hunt, skin and mount on wall in the bedroom of every Zambian voter an issue that would make Lungu and PF to be seen leading the country on a bad path. That issue must not be abstract and elitist, but appealing to the common voter.
NN
Posted by Unknown at 19:01