The Politics of Celebrating Zambia’s Independence 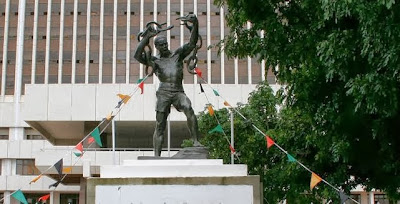 For full eight years during the reign of Levy Mwanawasa and two additional years of Rupiah Banda as President, Sata never saw any national importance in the Independence Day of Zambia. He also refused to attend Youth Day, Labour Day and to observe the Heroes and Unity and other national calendar events.
Radio QFM quoted Sata in 2009 as follows:

“Yesterday, Patriotic front Leader Michael Sata said he will boycott this year's 45th independence celebrations despite being officially invited.
Mr Sata wonders what is there to celebrate when the country's own Telecommunications utility is being privatized and the country is facing a fuel shortage.
He says president Rupiah Banda can hoodwink Zambians with his apology over the fuel shortage in the country but that he cannot bluff them.
Mr Sata says when president Rupiah Banda came to power corruption at play wanted to influence the supply of crude oil and that the inexperienced people brought in are only after making money.”

Today, Sata is republican President and has not taken kindly to the opposition leader Hakainde Hichilema who has asked Zambians not to join in the Independence Day celebrations that fall tomorrow, October 24.

President Sata, through his press aide described Hichilema’s call on Zambians to shun the Independence Day celebrations as an insult to freedom fighters and many who lost their lives to liberate this country.

“Mr. Hichilema’s efforts to entice Zambians with such ‘pick- pocket schemes’ are proof of his inappropriateness to be considered for public office. We know he is desperate to manufacture excuses to justify his dwindling political fortunes but let him for once respect moments that bind us together as Zambians,” the President said.
Further Sata said:
“Mr. Hichilema’s irresponsible utterances only go to show his self-centredness and glutton. In fact, both his professional and political life bear features of a transmissible existence. Probably, this why he does not value other people’s hard work because he is used to take over benefits born out of other person’s sweat and blood.”
But what Sata says against Hakainde today shamelessly says what he is himself. Sata has never known to apologise or to keep quite from criticising opposition leaders for doing the same wrong things that he perpetuated while in opposition. He knows how to pretend and he is so self conceited to think that Zambians are of short memories to forget that he is the author of bad opposition politics that disrespected all events of national nature.

He even forgets that under the reign of Frederick Chiluba’s government, in which Sata was both Secretary General of the Party and third in hierarchy as minister without portfolio, Kenneth Kaunda who was Zambia’s founding President was never allowed to step foot at any national event. The Independence Days the MMD celebrated in the 1990s were not about the self rule determined in 1964 by our freedom fighters including Kaunda, but MMD victory over UNIP in 1991. Sata tolerated that version of Independence.
Today he is making a fuss about trying to appear as though he has not been part of the park of misfit politicians who have contributed to making our Independence become highly politicised.

What he needs to do is apologise to the country.

And as part of reconciling the nation to true patriotism and honouring the freedom fighters of this land, he must apologise to the country for his unpatriotic conduct of refusing to attend the Independence celebrations for 10 years. He must also apologise on behalf of the MMD regime to which he was part for the first 10 years that destroyed every Independence struggle landmark that was associated with UNIP across the country.

One of the things he must redeem himself over is to tell the nation who removed the flame symbol that was mounted on the white facade of the Freedom Statue at Kamwala.

The white space in front of the wall on which the bronze Freedom Statue is mounted never used to be blank and life less as it is today. The facade was well decorated with a hand holding a torch of a flame which was a symbol of keeping the country’s dream burning in the right hand for mother Zambia. The flame was also UNIP’s symbol during the freedom struggle and has continued to be today.

But the politics of anger of trying to erase all that was associated with UNIP, Kaunda and Independence; the same politics of the first MMD regime to which Sata was part and has an opportunity to seek exorcism, went and pulled down the flame.

Instead of hoodwinking the young people who might not know that he also refused to attend and respect Independence Day celebrations, Sata must at least show some remorse about some things that he did not do correctly politically. We might not be interested in the many social wrongs that he knows in the chambers of his heart he could have committed against close friends and family members—these are for his conscience to remind him and his shadow to catch up with him when the sun finally goes down on his life—but for political wrongs he must apologise.

Maybe he talks about 10 commandments for fun and stands to read the bible for show off. But if not, then he must also be alive to the teaching of the Christian Holy Book about “Do unto others, the way you would want they do unto you”. He must also be aware of the saying that it is sinful to reach out trying to remove a log in another man’s eye while forgetting about the log in your own eye.

The same plate and the soup of unpatriotic politics in which Hakainde dips his fingers today, President Sata dipped his both hands and selfishly wiped the enamel clean with his tongue. In short, he over did these things he sees as wrong today.
Posted by Unknown at 07:10