ZAMBIA: NO NEXT DAY IN POLITICS


Our body politic has lost morality; it has been infiltrated by shameless, selfish individuals masquerading as leaders. They are pathetic charlatans, who have turned our politics into a means of personal welfare rather than providing service for the good of society.
By Nyalubinge Ngwende


It seems in this country there is no next day in politics, and advancing political issues in the opposition is no longer seen as a noble cause but a diabolical curse; inimical to national interests. As such, being in the opposition seems to be an irritation that is very hard for most of our politicians to endure. Opposition politics means less of being an alternative government in waiting than a fairytale.

The next day of Zambian politics is always one that has become synonymous with defections from the opposition to the ruling party, with those MPs and cadres, who are defectors, justifying their actions by all sorts of fables. Some reasons that are advanced are so annoying that one would wonder where politicians with right morals and good sense of reason have gone, to leave us seeing and listening to this despicable fraud.


Our body politic has lost morality; it has been infiltrated by shameless, selfish individuals masquerading as leaders. They are pathetic charlatans, who have turned our politics into a means of personal welfare rather than providing service for the good of society. They find it difficult to stand for what is right and just, ready to sell their soul for a bowl of porridge. They are a fraud and spineless politicians who fail to wake up the next day still holding what they believed in before their political party lost elections.

In the face of defeat, many politicians of this country cannot keep and repeat what they said yesterday today; they cannot stand up and defend the values and beliefs of their political party. They shamelessly contrive themselves to the basest of human immorality. Licking their lips with their tongue like the deceitful serpent they can turn night into day once they open their mouths, change Lucifer into angel Gabriel when they mean to be manipulative. They say completely opposite things about what they said yesterday, praising what they condemned and condemning what they praised, seeing great good leadership in those they told us were tyrants, while those who were good leaders they stood with yesterday turn into tyrants today.  They abandon old alliances and embrace new ones, they are nothing short of the proverbial meaning of politics of the belly, ready to bootlick and endorse most useless and worst ridiculous of decisions to purchase their way into government. They are a fraud publicly carrying their heads high, unashamed of the debasing tag—“get embarrassed so that you can eat and survive”—dangling around their neck. 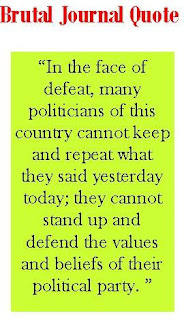 Unfortunately the iniquitous political masquerades are not alone pulling down the very essence of multiparty politics and the exciting spirit of providing checks and balances to those in government. The leaders of the ruling party are encouraging the insidious politics. They see the narrow, selfish view of ‘politics as being a game of numbers’ and personal choices therefore, and for this, they fake forgiveness to accommodate defectors including those who might have said the most of ‘rotten’ things against them.

It is all in the name of getting numbers, it seems. But they cannot fool us into believing that this is forgiveness, it is just a culture of dirty politics that they want perpetuated in succession. They know it is only the renegade politicians who can say the nastiest of things about the members of their former political parties. An attack from one who has defected against his or her former party is the best weapon of destruction for political opponents. So, with our resources but not consent, government is ready to buy mercenaries at any cost: triple deputy minister positions in one ministry and a cascade of by-elections at the expense of addressing pressing national issues.

We are also aware that a government can create an environment conducive for defections to garner needed numbers to legislate wrong things in parliament. It has happened with a K1.4 billion budget allocation for the retirement house of President Sata who still has four years to go and K1.5 billion for the First lady, Christine, who does not constitutionally qualify for such an allocation.

Whichever way this is looked at, it takes away the decency in our politics. Those who we share a good sense of judgment with, see this as doing politics to only feed one’s self interest, promoting political ‘terror’ where they are even ready to embrace things that hurt their own conscience just to have their way. The narrow minded politicians do not see this. This lack of principles and inconsistencies in the political discourse is taking away the defining line between what is true or false, wrong or right about politics; sincere and insincere in what politicians say about each other. It is bad political orientation that is being abetted by the Patriotic Front government. It leaves voters disillusioned, while serious minds will take these politicians as an awful bunch of fools.

As unceasing clarion call, it is the duty of a few of us who are blessed with a good sense of judgment to sensitise those lacking in wisdom about the things they need to know. Losing elections or debate in politics does not mean everything is lost. It does not mean that you have even lost the virtues to hold or continue holding your proposition and disposition. It does not mean that your political party has lost its character and relevance to the democratic process of the country. Further it does not imply that those who have won have taken everything away from those who have lost. It does not entail the meaning and essence of democracy shifting into the hands of those who hold power today.

Democracy does not change meaning, so does the essence of politics when the instruments of power shift positions.  Democracy remains true when its virtues are shared among divergent groups; politics is meaningful when it is used to resolve differences.

In simplicity, politics is a process in which society agrees on how they will manage the affairs of society or a nation. This is done through political parties, which are differentiated in many ways by varying factors, and these ways and means of managing the affairs of a nation becomes the primary defining difference that makes us choose which political team we must join and which one we must not. When we join a political party it is not automatic end that it must form government. But if that happens, forming government also is not the end of the purpose of our being in politics—it is just a means by which political party ideas are translated into national programmes while competing with the alternatives held by those in opposition.

It is also not about the name of one political party or the other that makes one to choose joining one party over the other. It is about the ideas and convictions that a group of politicians hold about how they will raise tax money, how they will promote commerce, deliver social services and ensure law and order that isolates different political groupings one from the other. In a democracy like Zambia, the values of good governance held through observed and consistent actions of the leadership of a particular party becomes a unique selling point for others to join them.  And since politics entails public office and life, the moral values of the people forming a particular party are also of essence when it comes to one arriving at a decision to associate with that one or next.

If the above observations form the quality basis that motivate decisions for one to choose one political party over the other, Zambia must use the same basis to start addressing the troubling question of incessant defections that are causing unnecessary and costly by-elections. This basis will also help take away the inconsistencies in the political discourse that has created disillusionment about our politics. It will help groom politicians who are able to say what they mean, and mean what they say. Politics will never be done for personal expedience where one or two politicians want to fit in every situation, including those that are wrong, as long as the irrationality of national sympathy seems to be with the crowd.

These facts will help political parties to stop fearing losing an election, which sometimes causes them to clamour at the last minute and adopt so called popular candidates who emerge from the blue but have little respect for what the party stands for.


What is such a person after? When today he attempts to stand on PF but after not being adopted becomes UPND or MMD a few minutes later. What will stop such a person from joining the blue party once he or she sees another opportunity? This culture of adopting frustrated candidates has killed morality and temperament that continue to elude the Zambian political culture. There must be a procedure that will screen aspiring candidates for various elective positions at party and national levels elections while ensuring that decisions to run on the ticket of a particular party is not fake, is not just out of joining a popular party but deep rooted belief in the party principles on issues of how it intends to manage the intricacies of the economy, including home security. It is the lack of deep rooted beliefs on issues that differentiate our political parties that make people to fail to articulate issues in their political messages and resort to calling each other names and disparaging each other’s big noses. 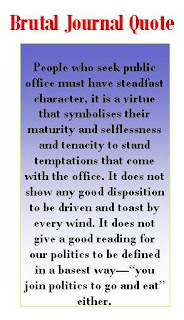 People who seek public office must have steadfast character, it is a virtue that symbolises their maturity and selflessness and tenacity to stand temptations that come with the office. It does not show any good disposition to be driven and toast by every wind. It does not give a good reading for our politics to be defined in a basest way—“you join politics to go and eat” either. Human life and activity, including politics, has different essence, different from the rodents that only venture into the field only to seek to eat. Joining politics should be more than this bad virtue that has become a synonym with Zambia.


It is known that politics has to do with numbers and is all about winning elections and forming government, but the sense that politics can always bring another day, another chance to be heard, to persuade and to gain support for one’s proposition, must be projected and told unequivocally to all the faint hearted politicians and their cunning idols. It must be the basis for not embracing defectors, no matter how valuable they might be to the ruling or opposition party winning elections. The effects of the immorality of one politician being so vocal against the leadership of one political party today and choosing to join the same leaders tomorrow because they have a chance to be in government may not be seen now, but they are sending a wrong moral clarion to young people. It has robbed our politics of morality and character to a point where a sitting President cannot see it as immoral to appoint people with questionable credentials important institutions of governance.