The nolle-prosequi entered into by the state in the case of disorderly misconduct against opposition Movement for Multiparty Democracy leader Nevers Mumba is an embarrassing blow to the Inspector General of Zambia Police, Stella Libongani. It exposes her sophism about the laws of the land and the just way they should be applied as accepted by the Zambian people based on the political system they have embraced—democracy.

Libongani must have known when she advised her police officers to arrest Mumba that there is no any case of disorderly misconduct for a politician to hold a political party meeting and travel with his members to go and meet chief Nkana. Mumba was purely acting within his political rights as a leader of an opposition political party. His actions (assembly and movements for political activity) are not imagined principles, but the customs of democracy that Zambians organised and enshrined into the country’s constitution.

When Zambians accepted democracy they honoured themselves with the gift of free speech and assembly and, above all, multiplicity in political activity. They said they would not only sit to listen to government leaders alone on how best this country must be run, but sought to allow for alternative ideas to flow from those in the opposition. They accorded themselves the desire of a free country where people are happy by being able to criticise government and their leaders without being treated as enemies of the state, brutalised by the police.

In short the Zambian citizens appreciate the truth that when the people in government fail them, they will seek an alternative, not necessarily to endure misgovernment at the hands of one party, but to replace it. This is only possible with the presence of an effective opposition; the truth that makes Zambians to have a happier political life, and anything short of that is unjust and makes them unhappy.

The above fact Libongani must have been aware of, even before she wasted the time and resources of the state pursuing an innocent political leader with a battalion of policemen at the expense of combating crime. At the time police were busy chasing around opposition political leaders, guarding empty spaces to stop political meetings from taking place, the country was facing a rise in gruesome murders of women and taxi drivers. The IG failed, so did the government, to do their duty to stop the actions of injustice perpetrated through killings and other robberies.

With one of her useless cases ending in a nolle prosequi, Libongani has now been put in her right place to fully know that the application of the law must not be imagined but determined in its outcome through justice for all; not applied for the convenience of unscrupulous group of people in government.

Government Pressure
One thing that is known is that such heavy handedness by police at political high level does not just come as a ‘knee jerk’ reaction by the law enforcers; usually it follows instructions from government. It comes as a result of police being wrongly used by those in government.

It is for this that Libongani did not misapply the law out of her own volition, but she shares the acts that have disgraced our image as a beacon of democracy in Africa with the PF government and president Sata. Sata told the country that when he was in the opposition he saw the Public Order Act as a bad law, but now that he is in government he appreciates it because the country needs to be governed.

More embarrassing to the government is that it poured scorn on the decision by the opposition to converge in Johannesburg in South Africa to appeal to the Commonwealth to intervene in Zambia’s degenerating democratic principles.

The Commonwealth responded this week by sending in an investigation duo. This could be more reason why the Director of Public Prosecution, Mutembo Nchito, could have decided to advise police to drop the case against Mumba. 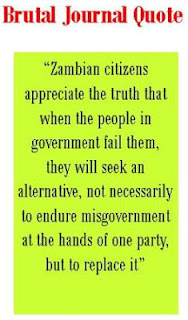 The government has started feeling the pressure of the petition sent to the commonwealth by the opposition who complained over the developing undemocratic laws, with the Patriotic Front Government using poslice to suppress opposition political activity in the country.

The police has been refusing the opposition political parties opportunity to hold public meetings using the Public Order Act, an oppressive colonial law that has been consistently misapplied by previous regimes but PF has extremely abused it; some instances opposition political leaders have been picked up for questioning just for walking through a market place and attracting the attention of the public.

In this one particular case for which MMD leader, Mumba, was in court and the state entered a nolle prosequi, police waylaid him on his way to visit a traditional ruler in Ndola rural.

Therefore Libongani does not go alone in the glare of shame over her bad usage of the Public Order Act; government is embarrassed, too, and it is equally wrong if it thinks a nolle prosequi in Mumba’s case will save it from serious censure, if not placed under sanctions, for violations of human rights.

And while Zambia celebrates her among a few women Inspectors General of police in Africa, Libongani must avoid being used to abuse people’s rights. If she does not abandon her bad habits, she should also be ready to face the International Criminal Court for crimes against humanity one day.